"Cabaret" and a Confused Teenage Boy 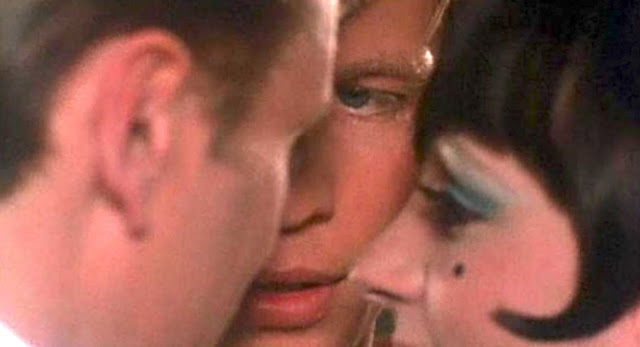 I was thirteen or fourteen when I saw the movie "Cabaret" for the first time when it arrived at the theater in my little hometown of Carmi in southern Illinois. There were three scenes from the movie that were seared into my memory at that time. One is captured in the above photograph. Another occurred later in the movie during an argument between Brian and Sally, the characters played by Michael York and Liza Minelli. The third depicts a scene shortly after Brian and Sally met.

I thought about those scenes, and about many other things, a few days ago when I watched "Cabaret" for the first time in many, many years* - certainly more than 30 as I'm quite sure I never watched it after I joined the LDS Church and got married. (It would have been considered far too risqué for a good Mormon priesthood holder to watch, and it also would have been considered - by me - far too gay, and thus too dangerous to watch.)

I did see a stage production of the musical in a small town in southeastern Ohio while working for my dad's oilfield equipment business over the summer. I went with my step-mother, Ruth. It must have been the summer of 1976 or perhaps 1977. I don't recall the musical stirring up quite the same feelings and thoughts in me as I had experienced with the movie; I think certain aspects of the movie were downplayed in the stage production.

As an aside, Ruth and I used to do a lot of things together in those years, such as pick out houseplants for their home, Ruth hoping that Dad wouldn't notice the new arrivals. Then there were the Hummels (Dan), then later paintings or things, as Ruth put it, "to set around" (on living room tables, etc.). We'd also go to movies together. Dad traveled on business a lot, but he also wasn't the type that enjoyed going to movies or shows. Later, Ruth and I would visit antique shops and furniture stores together, both while I worked there over the summers and after I graduated from college and worked there full-time. I suppose you could say she was my fag hag during that period of time when I was in college and shortly thereafter, although neither she nor I realized it.

As I sat watching the movie the other night, one of the thoughts that came to me was, "My God, I wouldn't have let my little kids watch this movie, especially back in 1972." But to me, at the time, it was my normal.

In the fall of 1971, I was beginning 8th Grade. I was president of our junior high student council and was also editor of the school newspaper. And, by the by, my parents had just separated, thus beginning a very nasty divorce - and I had recently discovered that I was sexually attracted to boys and men, not girls and women - without the faintest idea what to do about it. A lot going on.

It was in my capacity as editor of the school newspaper that I paid a visit to Mrs. Lee, the manager of the one and only theater in our town (unless you counted the drive-in), just a block away from our school. Since a lot of junior high kids went to the "show" every Friday night, I thought I'd run a feature about upcoming films that would be playing.

I came away from my interview not only with information about upcoming movies but also a job offer - to work in the concession stand on weekends for $0.75/hour. I went home and asked my parents (my dad used to come over to the house most evenings) if I could take the job. They assented. I don't recall much discussion about it.

What that meant, among other things, is that I, as an eighth-grader, had regular access to all the movies that were playing, including R-rated movies. Within a year, however, I had been promoted to projectionist, which meant that (besides the fact that I was now making $1.50/hour) I was not just seeing scenes in movies as I walked back and forth to the ice machine behind the screen or obtained candy from the storage room; I was watching entire movies from the projection room - as a high school freshman (who was very young in his class).

One of those movies was "Cabaret."

The first scene that made a lasting impression on me as a teenage boy was the one where Sally "makes a move" on Brian. When he showed no reaction to her kiss, his eyes wide open as she leans into him, she expresses surprise and disappointment and off-handedly says that maybe Brian likes boys. When he fails to respond, she exclaims, "You DO like boys!"

This was, I am sure, the first time I had EVER seen a reference to homosexuality on the screen - whether in a movie or on television. Back in those days, of course, the only access one had to media were the three network channels on television (four if you count PBS) and movies that one went to see in a theater. Needless to say, homosexuality was never mentioned.


So, here I was, 13 or 14, having only fairly recently discovered after going through puberty that I was attracted to boys, seeing the incredibly handsome Michael York depict a character who might be like me. That, I suppose, was affirming to me, and this stuck in my memory.

But then came the confusing part: Sally successfully seduces Brian and they thereafter begin an affair which he seems to very much enjoy, sexually. He comments that he had previously had only three unsuccessful attempts to have sex with women and had been turned off. Then Brian and Sally observe together that they must have been the wrong women.

And that's another thing that stuck in my memory: though there were apparently gay men out there, they could apparently happily have sexual relations with a woman IF she was the right woman. As I grew into adulthood, went through college and started my working career, I assumed that I would get married to a woman, someday, once I had "found the right woman"; and my attraction to men would fade away.

The second scene that stuck in my memory was the one where Sally, Brian and Maximilian are dancing cheek to cheek on the ballroom floor at Maximilian's family estate. Naive as I was, I nevertheless knew what I had already experienced in terms of attraction, and I could see the obvious sexual attraction and tension between Brian and Maximilian. Again, I had never seen anything like that depicted on the screen.

The last scene I vividly recalled was one in which Brian and Sally are arguing. Sally admits that she was "screwing Max." Then Brian responds, "Me, too."

Wow! Again, I had never heard anything like that on screen. The whole affair between Brian and Max was left to the imagination, but those two words - "Me, too" - had an electric effect on me.

I don't know how many times I saw "Cabaret" while it was playing at the theatre. But I know I formed a long-lasting crush on Michael York, and the confusion generated in my mind by these scenes - and from many other sources over the course of my young adult years - would come to me many times as I went out on (very few) dates with girls and later as I contemplated my future. Could I marry? Would I marry? Would I ever experience what Brian and Max apparently had?

It was a lot for a 14-year-old. But not nearly as "heavy" (to use lingo of the time) as first discovering that I, in Sally's words, "like boys."

I was inspired to watch "Cabaret" again by my recent visit to Berlin. My friend, Dan, took me on a quick tour of the neighborhood of the apartment that he and his husband, Russ, had just moved into, only a few blocks from Nollendorfplatz U-Bahn station. A storied area of Berlin, it has long been the city's "Gayborhood." It was here that Christopher Isherwood, upon whose writings "Cabaret" is based, lived for four years from 1929 to 1933. Dan took me to the building where he lived. It was, in a sense, the completion of a journey that had began in 1972 in a small town in southern Illinois.