The Dream That Changed My Life … 25 Years Later 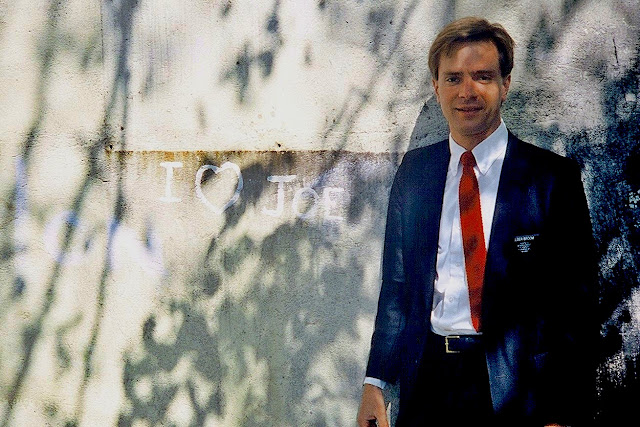 The events of this past week in Paris brought up many memories of when I was a missionary there. They also reminded of a special anniversary. Thirty-four years ago today, I had a dream that would, 25 years later, play a key role in dramatically changing my life.

A Mormon Missionary in Paris

I was a Mormon missionary in Paris in the winter and spring of 1985. I had arrived in the city shortly before Christmas after spending the first four months of my mission in Brest, a town at the tip of Brittany. It was quite a culture shock going from the provinciality of that place, where there were only two of us missionaries in a small branch of the church, to a bustling city of millions where a dozen missionaries served in the two congregations of the church that existed in Paris proper – one consisting of families and older single people, the other of young single adults from the Paris area.


That winter of 1985 was one of discontent. Missionary work was hard in the best of circumstances. But I faced struggles that went beyond the emotional demands of daily trying to trying to talk to strangers about the Book of Mormon and the “restored Church of Jesus Christ” and facing the inevitable rejection, time after time, day after day, week after week. Beneath this superficial layer of emotional trauma that all missionaries faced lay a struggle, increasingly strident, that I also coped with on a daily basis: the struggle with “unwanted feelings of same-sex attraction." Like countless others who were "like me," these feelings engendered fear, self-alienation and self-hatred.

When I had joined the LDS Church almost two years before, I had truly believed that I could leave my same-sex attractions behind me, attractions that I had experienced, by that point, for over 12 years. One of the things that had attracted me to the Church was its teachings that someone like me could live a "normal" life, could get married to a woman and have a family. That is what I wanted. I thought I had finally found "the cure."

I had believed the Church's "line," and I had worked diligently in the ensuing two years to discipline my mind. I had prayed. I had done everything I was “supposed” to do, and more. I wanted to “change,” and I believed that I could/had.


That is why what was happening to me in Paris was so distressing.

The first four months of my mission in Brest were fine, i.e., I experienced no “temptations,” and I had little trouble controlling my thoughts. But after being transferred to Paris, temptations to "unclean thoughts" seemed to come at me from everywhere: attractive young men who attended our English classes; beautiful men on the street; scantily clad male models on billboards; works of art in the Louvre whose homoeroticism moved me; sensuality that was palpable.

Then, for the first (and only) time in my life, I was publicly propositioned by a guy – directly, unmistakably, in a store in the heart of Paris. It scared me to death.

Then there was the older male member of the Church, in a leadership position, who had befriended me. I strongly suspected he was gay, but I enjoyed the attention and--as an older missionary (I was 27, whereas most missionaries were 19 or 20)--the friendship. Another male member, also in a leadership position and also probably gay, seemed to see right through me, memorably asking of me one time, "What's behind that mask of yours, Elder?"

Again, I was scared to death. Why were these things happening to me? I felt like I had a sign hanging around my neck--apparently visible to some--that said, “I am gay, but don’t tell anyone.” It's not like I was tempted to hop into bed with a man. What was so disturbing to me was that I thought I had "overcome" this part of myself.

But as unsettling as all of this was to me, I was at the same time feeling somewhat enlivened. For the first time since joining the Church, I allowed the genie of my repressed sexual orientation to waft out of the bottle of its imprisonment and allowed myself to contemplate who I really was—or might be. It was exhilarating, but it was also frightening – particularly since I was a missionary.


It was after struggling with these thoughts and emotions that swirled around me during that Parisian winter and early spring of discontent that I had a dream that was unlike any that I have ever had, then or since. It was so palpable, so real, so revelatory. It was and is, without question, the most vivid dream I have ever had—then or since. Even today, 34 years later, I can remember it as if it were yesterday.

I dreamt that I entered a large room filled with people dressed in white. At the front of the room was a person whose presence seemed to tower over the others. All in the room, including myself, were drawn toward him. As I made my way to the front of the room, my eyes became locked with his and he beckoned me to come to him, to take his hand and embrace Him. I remember thinking: “He’s real! He really does have a tangible body.”

As soon as I took his hand, we were transported, just the two of us, to another place, where we sat across from each other and talked. Rather, I talked; he listened lovingly and patiently, about my fears and joys, the deepest corners of my soul … and my ultimate secret.

My gaze never left his countenance, and in his beautiful eyes, I saw love such as I had never before felt. In those eyes, I saw no judgment, no guile; only perfect, total understanding. His very countenance radiated such intense purity that I felt as if I would faint from bathing in such exquisite peace and love. In this setting, enveloped in love and light and truth, I told him of my ultimate secret, something I had never shared with anyone. I told him of my attraction to men and how I had struggled against it but how it wouldn’t let go. 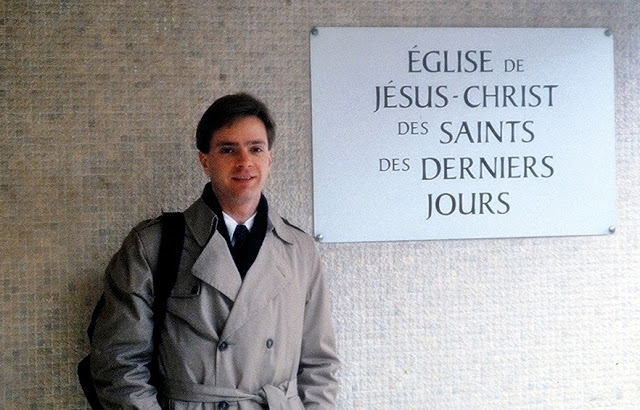 I suppose that, possibly, I expected him to miraculously change me at that moment—to make me straight. Right. True. Whole. But that didn’t happen. Rather, in that atmosphere of unworldly love and transparency, he looked at me with, if possible, increased compassion with a face that had grown, if possible, even more lovingly beautiful, and uttered two words: “It’s okay.” Then, he smiled, and I was given to understand that he loved me just the way I was. Then, the dream was over.

The following morning, I woke up and wrote in my journal that “I had a very interesting dream last night.” Then I went about doing my missionary work. Ten days later, I was transferred to a new city in the Loire Valley. My life went on. The “temptations” and thoughts and anxiety subsided. Within eight months, I was home.

One might have thought that this experience of my dream would have given me permission to embrace my gay self. But the message of the dream and the message of the Mormon Church regarding homosexuality in the mid-80's were completely opposite to each other. And I wasn’t strong enough to accept my attractions, let alone embrace who I really was. Nevertheless, I hated myself a little less and accepted myself a little more following that dream. I also learned that these attractions weren’t something that could be prayed away; they could only be managed.

And that’s what I set about doing. However, even though I married a woman and vowed I would never come out and that I would make a success of my marriage, the memory of this dream and its piercing message sustained me in believing that God didn't condemn me merely for being who I was, for having the attractions that I did.


Now, fast-forward 25 years, to Sunday, October 3, 2010. That morning, I heard four sentences that wrecked my faith in Mormonism, eventually shattered what was left of my marriage (which had already been on life support for several years) and destroyed a false persona that I had carefully maintained for decades.

These words, which quickly became infamous, were uttered by the second most senior apostle of the Mormon Church in his address at the Church’s worldwide October General Conference. In the midst of a sermon about moral purity, President Boyd K. Packer read the following sentences:

As a heavily closeted gay man, these sentences cut through my heart, as they no doubt did with countless other Mormon men and women who were privately and painfully struggling, as I was, with same-sex attraction. Packer’s words, heavily coded, were reminiscent of the period of my young adulthood when the LDS Church railed vociferously against the “abomination” of homosexuality. I felt that I was being dragged back into a very dark place of self-loathing, shame and despair.

Not only had President Packer called me, and those like me, “impure and unnatural,” he had poured salt in open wounds by saying, in so many words, that God would and could never make such a depraved person as me, nor could or would he love me for who I am. Even before God, in the tortured chambers of my innermost being, could I be my true self because my true self was not acceptable, let alone lovable.

But. I knew differently. In the most sublime spiritual experience of my life, in the most vivid dream of my life 25 years earlier while a confused and disheartened missionary in Paris, I had been told that God loved me just as I was: gay.

That is why, when President Packer said those infamous words, I knew he was wrong and that he was not inspired by God--even though for the past 27 years I had regarded him as a prophet, a man who communed with God. What had been the most spiritual experience of my life that night in Paris had convinced me that God did not condemn me.

Packer’s words, as well as the vast theological and cultural dogma and mindset that lay behind these statements, caused a tectonic shift deep within me. In the moments, hours and days that followed, I realized that I was no longer willing or even able to repress who I am and that my homosexuality is a fundamental part of who I am. Furthermore, I was tired of feeling guilty and dirty about it.

Thus began my journey out of the closet, marriage and Mormonism, thanks in large part to a dream I had had 25 years earlier but which, at the time, I could not fully appreciate or understand. Even now, I don’t claim to fully understand it. But I know that it eventually helped to change my life, and that Paris would forever hold a special place in my heart because of it.

It was perhaps appropriate that the first time I saw Paris again after leaving my mission on a cold overcast day in November 1985 was on a brilliant sunny day in September 2012--in the company of the man who would become my husband. As Mark and I walked the streets of Montmartre and the Latin Quarter, rode bikes along the Seine and toured Notre Dame and the Louvre, I marveled at where life had brought me. And I thought of the dream I'd had that April night in 1985, and I was grateful. 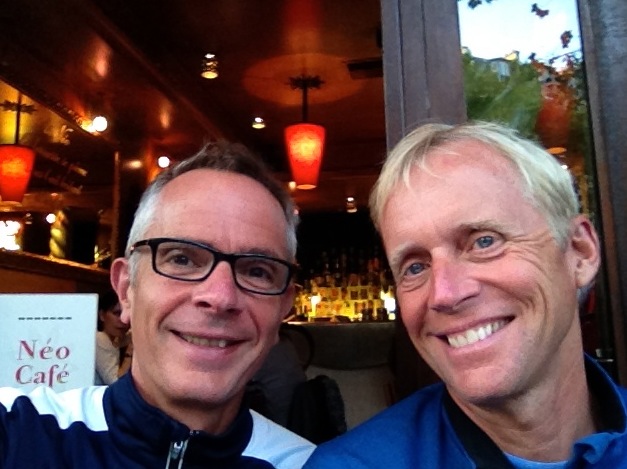 Posted by Joseph Broom at 6:52 AM No comments: